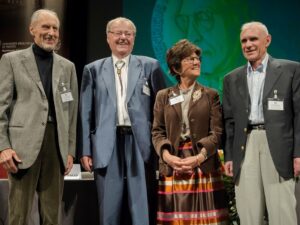 Citation
for their outstanding contributions to neutrino physics and astrophysics

In particular:
– to Gianpaolo Bellini, for the measurement of the solar neutrino spectrum, providing the evidence for nuclear hydrogen fusion in the Sun and for adiabatic neutrino flavor conversion in matter;
– to Veniamin Berezinsky, for his theoretical contributions to the cosmogenic production of ultra-high energy neutrinos, to high energy neutrino astronomy and to the solar neutrino problem;
– to Till Arnulf Kirsten, for the first observation of low energy solar electron neutrinos providing the first direct evidence of hydrogen fusion inside a star.

The prestigious prize “Enrico Fermi” has been awarded starting from 2001, to commemorate the great scientist on the occasion of the centenary of his birth. The prize is yearly awarded to one or more Members of the Society who particularly honoured physics with their discoveries. A commission made of experts appointed by SIF, CNR, INAF, INFN, INGV and INRIM selects the winner/s among a list of candidates and sends the proposal to the Council of SIF for final approval.

Borexino on a special stamp by the Italian Post Office

Borexino experiment is listed in 2020 Top Ten of Physics World


“The 2021 Giuseppe and Vanna Cocconi Prize for an outstanding contribution to Particle Astrophysics and Cosmology is awarded to the Borexino collaboration for the groundbreaking observation of solar neutrinos from the pp and CNO chains that provided unique and comprehensive tests of the Sun as a nuclear fusion engine.”