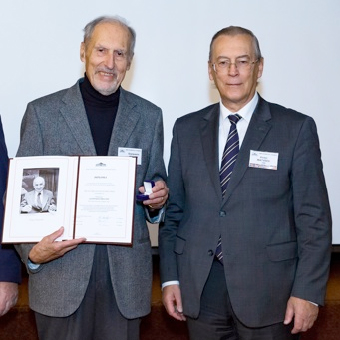 Friday September 13, 2016 at the presence of the Council of the Joint Institute of Nuclear Research (JINR) in Dubna, Prof. V.A. Mateev, Director of JINR has given to Gianpaolo Bellini the Bruno Pontecorvo Prize 2016.

Prof. Bellini has been awarded by an International Committee for the following reasons:

“For his outstanding contributions to the development of low-energy neutrino detection methods, their realization in the Borexino detector, and the important solar and geo-neutrino results obtained in this experiment”.

This award, one of the most prestigious in the field of Physics is awarded to scientists who have contributed with very important breaktroughs to the Particle Physics and in particular to the Neutrino Physics.

The experiment Borexino, chaired by Gianpaolo Bellini from 1990 to 2011, has demonstrated that the Sun operates according to a cycle of nuclear reactions by measuring the flows of the emitted neutrinos and showed the Sun stability at 105 time scale. In addition Borexino reached for the first time evidence of the phenomenon of neutrino oscillation in vacuum, by measuring the ratio between the survival probability of survival in a vacuum and in matter of the electron neutrino.

The prestigious International Prize “Bruno Pontecorvo” 2016 was awarded to the Italian physicist Gianpaolo Bellini “for his outstanding contributions to the development of low-energy neutrino detection methods, their realization in the Borexino detector, and the important solar and geo-neutrino results obtained in this experiment”.

Emeritus Scientist of the italian National Institute of Nuclear Physics (INFN) and Full Professor (now retired) at the University of Milan, Bellini is an experimental physicist of the Elementary Particle and Astroparticle Physics.

In the various experiments he carried out at the major international laboratories Bellini reached many important original results, some of which are actual discoveries. We can remember: in the 70s, the physics of “Coherent Productions of high-energy particles on nuclei”, written almost completely by the Bellini’s works, which clarified important aspects on the mechanism of the interaction and production within the nuclear matter, and led, among other things, to the discovery of the first and second radial excitation of the p-meson (CERN and IHEP of Serphukov-Russia); in the 80s, the first measure of the lifetime of a particle with Charm with exponential method (CERN), and the first measure of the lifetimes of all particles with Charm (Fermilab-USA), achieved thanks to the active Silicon target, designed by Bellini, and to the first microvertex constructed in his laboratory.

Since 1990 Bellini has designed, installed in the Gran Sasso Laboratory, and managed as spokesman during more than 20 years the Borexino experiment, unique in the world for its ever achieved radio-purity, able to measure neutrinos from very low energies. Borexino has measured for the first time: the solar luminosity through neutrinos (result nominated among the “Top Ten Breakthroughs 2014” by the British Institute of Physics), the neutrino oscillation in vacuum regime, the solar fluxes from all nuclear reactions active in the Sun, confirming the Solar Standard Model predictions, and measured the geo-neutrinos with an evidence of more than 99.9999993% of probability.

Currently Borexino is working to get a new important measure concerning the massive stars and to test the existence of a fourth neutrino (sterile neutrino).

Borexino experiment is listed in 2020 Top Ten of Physics World