Borexino is a particle physics experiment performed by an international collaboration in the “Hall C” of the Laboratori Nazionali del Gran Sasso (LNGS).  The Borexino physics program is centered on Solar Neutrino, but also includes other relevant topics in low background neutrino detection (including geoneutrinos) and underground physics. 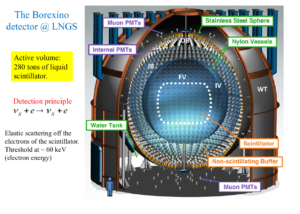 The Borexino detector is a large, low background liquid scintillator detector designed to reveal low energy (sub-MeV) neutrinos in real time.  It was built with the main goals of performing solar neutrinos spectroscopy and to measure the 7Be neutrino flux from the Sun.

The very low energy threshold needed to achieve such goals in turn required an extreme radiopurity of the detector (at lest 10 orders of magnitude better than in typical natural conditions).  Nothing is standard in Borexino: all detector parts and components had to be developed ad hoc, with all involved materials carefully selected for radiopurity (measurements were made with Germanium detectors and mass spectrometers). Everything had to go through clean rooms (five were built around the detector). The inside of the detector itself have been equipped as a clean room. The welds were tig in nitrogen or argon atmosphere, all surfaces were pickled and passivated, the nitrogen for stripping was cryogenically purified, etc.

The extraordinary radiopurity achieved by Borexino (unprecedented for such a large detector), further improved over the years, have made it possible to accomplish not only its primary goals but also to produce many other interesting results both within and beyond the Standard Model of particle physics.

A selection of the experimental data acquired and analysed by the Borexino collaboration for some of our publications has been made freely available as “Open Data”.

A Borexino prototype, called the Counting Test Facility (CTF), has been built and operated in the Hall C of LNGS between 1994 and ’96.  This (now dismantled) detector demonstrated the achievement of ultra-low count rates (radiopurities of the order of 10-16g/g of 238U equivalent) on the several-ton scale.

For more information and details please refer to these articles: