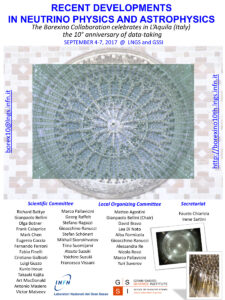 «The Borexino experiment – designed for world-class research in neutrino physics (especially, their oscillatory behavior), with particular emphasis on solar neutrinos and antineutrinos coming from Earth’s interior (geo-neutrinos) – began its data-taking phase in May 2007.

2017 is therefore the 10th anniversary of Borexino’s continuous data-taking: from September 4th to the 7th, physicists and astrophysicists will gather at LNGS and GSSI to discuss new perspectives on the many neutrino topics under active research. The meeting is organized as a workshop, in order to allow wide discussions about all the diverse aspects of neutrino physics, the various neutrino sources and the approaches employed to probe them, as well as the models and approximations describing their behavior.»

A Special Borexino event at LNGS