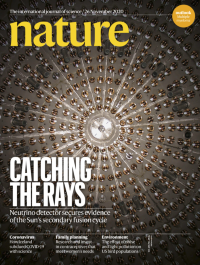 The datasets generated during the current study are freely available: see below (scroll down). Additional information is available from the Borexino Collaboration spokesperson (spokesperson-borex@lngs.infn.it) upon reasonable request.

For most of their existence, stars are fuelled by the fusion of hydrogen into helium. Fusion proceeds via two processes that are well understood theoretically: the proton–proton (pp) chain and the carbon–nitrogen–oxygen (CNO) cycle1,2. Neutrinos that are emitted along such fusion processes in the solar core are the only direct probe of the deep interior of the Sun. A complete spectroscopic study of neutrinos from the pp chain, which produces about 99 per cent of the solar energy, has been performed previously3; however, there has been no reported experimental evidence of the CNO cycle. Here we report the direct observation, with a high statistical significance, of neutrinos produced in the CNO cycle in the Sun. This experimental evidence was obtained using the highly radiopure, large-volume, liquid-scintillator detector of Borexino, an experiment located at the underground Laboratori Nazionali del Gran Sasso in Italy. The main experimental challenge was to identify the excess signal—only a few counts per day above the background per 100 tonnes of target—that is attributed to interactions of the CNO neutrinos. Advances in the thermal stabilization of the detector over the last five years enabled us to develop a method to constrain the rate of bismuth-210 contaminating the scintillator. In the CNO cycle, the fusion of hydrogen is catalysed by carbon, nitrogen and oxygen, and so its rate—as well as the flux of emitted CNO neutrinos—depends directly on the abundance of these elements in the solar core. This result therefore paves the way towards a direct measurement of the solar metallicity using CNO neutrinos. Our findings quantify the relative contribution of CNO fusion in the Sun to be of the order of 1 per cent; however, in massive stars, this is the dominant process of energy production. This work provides experimental evidence of the primary mechanism for the stellar conversion of hydrogen into helium in the Universe.

In November 2020, the Borexino Collaboration publishes [Nature volume 587, 577–582 (2020)]  the first experimental evidence of neutrinos produced in the carbon-nitrogen-oxygen (CNO) fusion cycle in the Sun.

For most of their lifetime, stars are fuelled through fusion of hydrogen into helium via two processes: the pp chain and the CNO cycle. While the pp-chain is dominant in stars as massive as our Sun, the CNO is the fundamental energy-producing process in bigger stars.

In 2018 the Borexino collaboration was already able to perform a complete spectroscopy of neutrinos from the pp chain. We now report the first experimental evidence of CNO neutrinos, obtained with such an unprecedentedly radio-pure, thermally stable, large volume liquid scintillator detector as Borexino.

The Borexino collaboration was able to measure the CNO solar neutrino interaction rate to be:

This corresponds to a flux of CNO neutrinos on Earth of

assuming the Mikheyev Smirnov Wolfenstein – Large Mixing Angle conversion in matter, neutrino oscillation parameters from F. Capozzi et al. (2018) , and a density of electrons in the scintillator of

The absence of CNO signal is thus disfavoured at 5 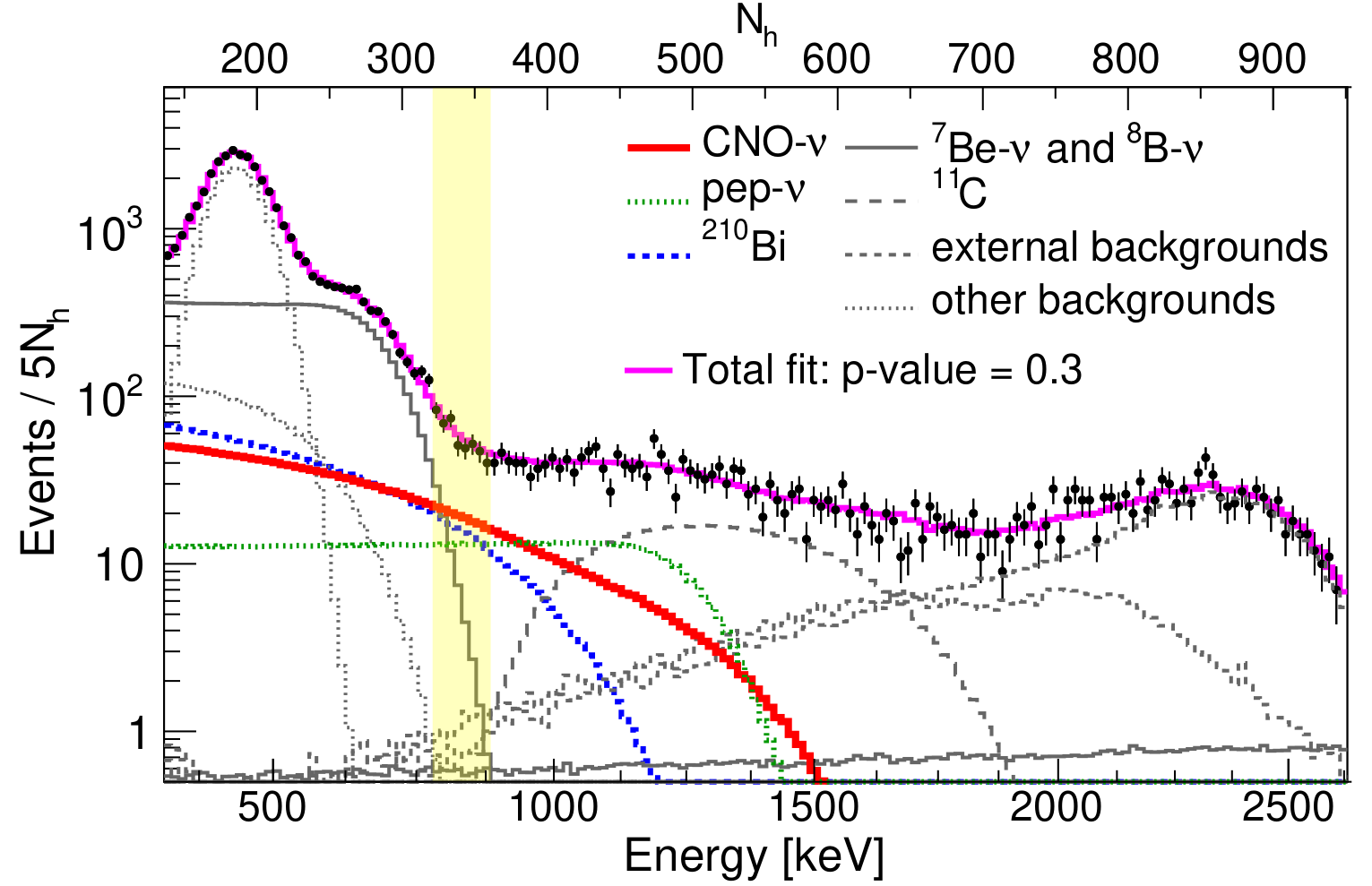 In this plot (Figure 2 of our Nature publication), we report the spectral fit of the Borexino data. The energy estimator

represents the number of photoelectrons detected by photomultipliers, normalized to 2,000 live channels. For sake of completeness, we also report the correspondent keV energy scale.

The distribution of the electron recoil energy scattered by solar neutrinos in the Borexino detector is defined by black points (properties of the data bins available here). CNO-neutrinos,

Bi and pep-neutrinos are highlighted in solid red, dashed blue and dotted green, respectively, and all other components are in grey. The total spectral fit is depicted in magenta. The yellow band represents the region with the largest signal-to-background ratio for CNO-neutrinos.

The correlation matrix of this spectral fit is presented below and can be downloaded here. 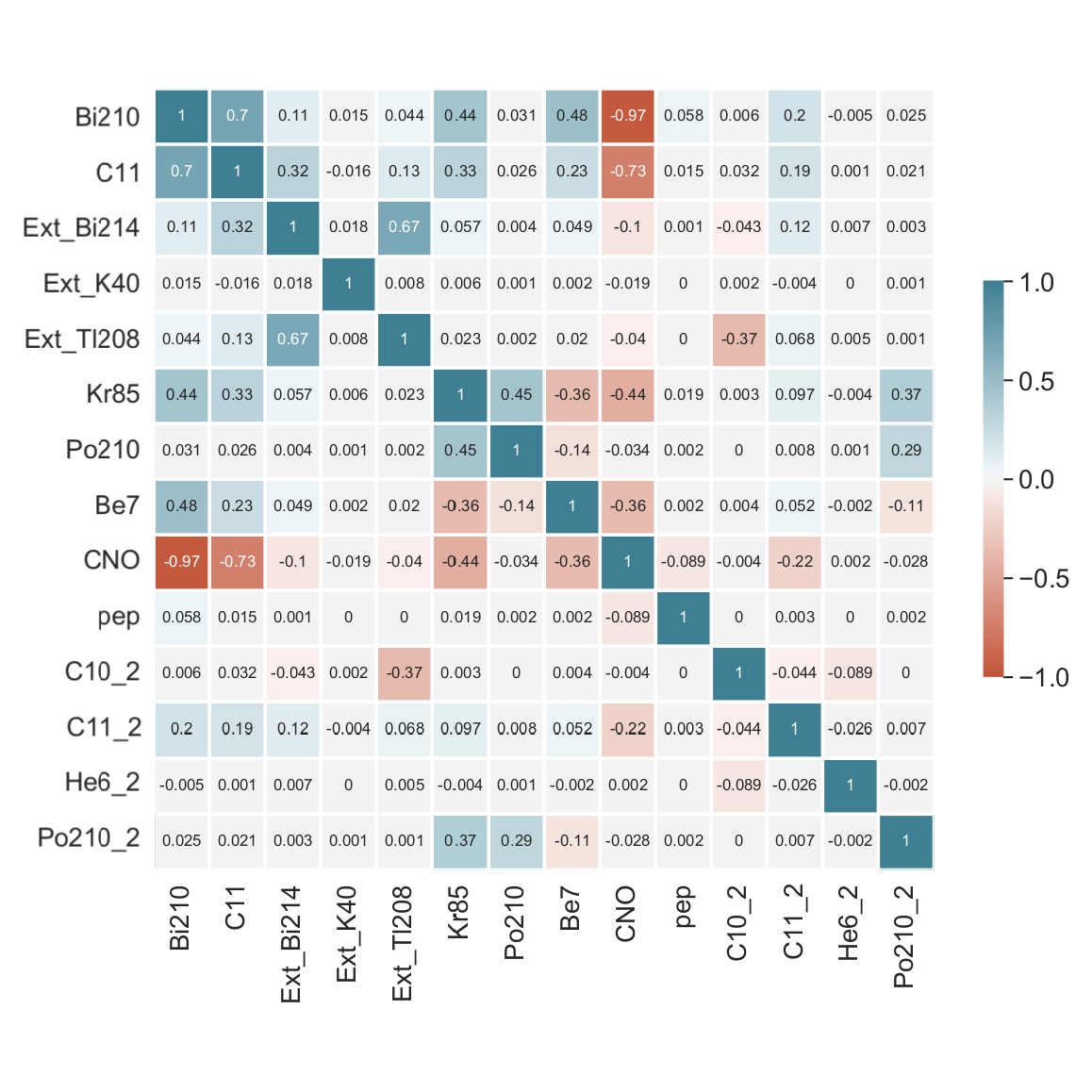 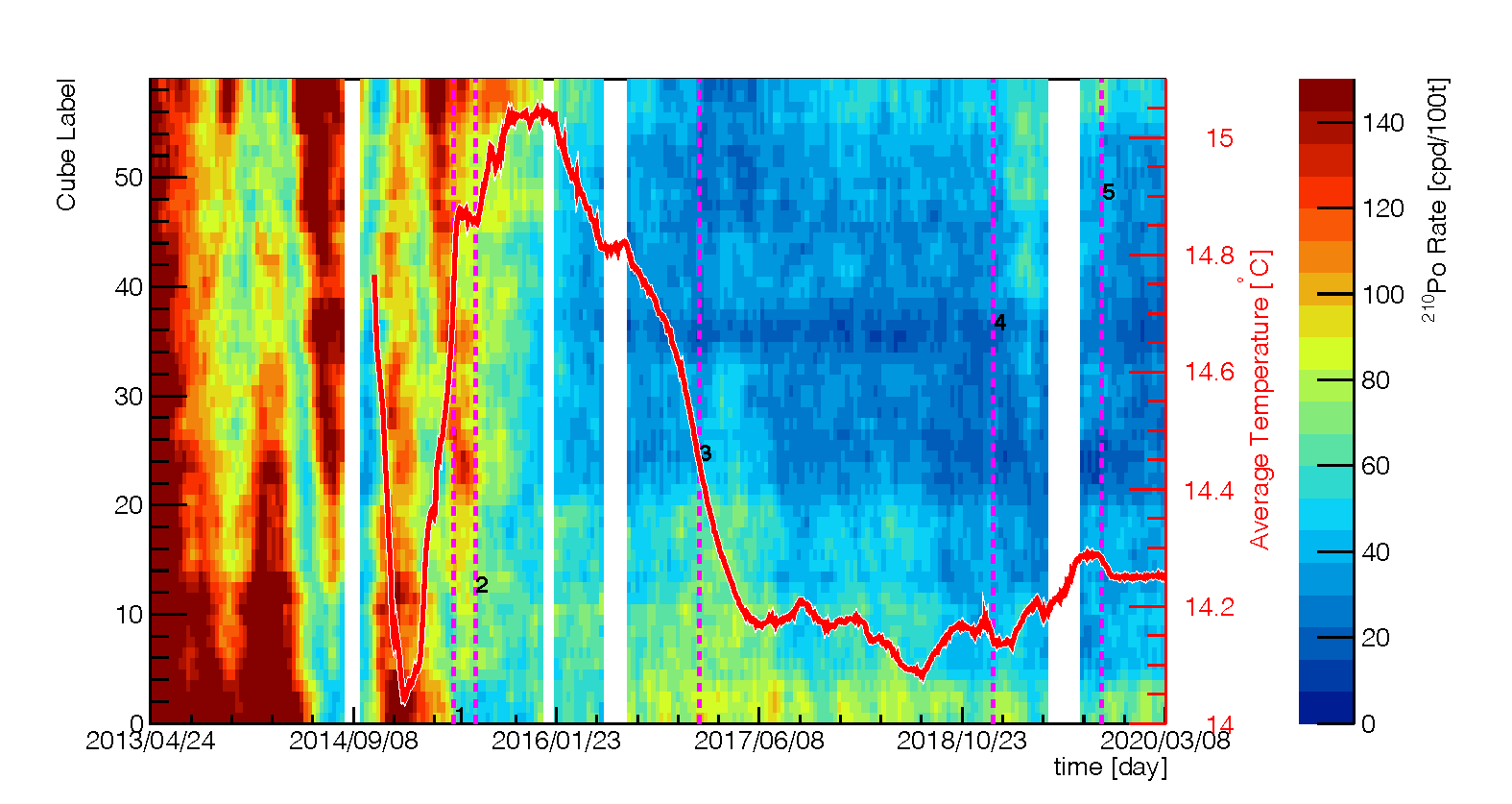 Po rate in Borexino is given in cpd (counts per day) per 100 t (rainbow colour scale) as a function of time. Each small cube is of about 3 t and is ordered from the bottom (0) to the top (58) along the vertical direction.

All cubes are selected inside a sphere of radius r = 3 m. The red curve represents the average temperature in the innermost region surrounding the nylon vessel. The temperature profile can be downloaded (two separate files) here and here. The dashed vertical lines indicate the most important milestones of the temperature stabilization program: (1) the beginning of the Borexino insulation program;  (2) the turning off of the water recirculation system in the water tank; (3) the first operation of the active temperature control system; (4) the change of the active control set point; (5) the installation and commissioning of the hall temperature control system.

Figure 4 of our publication report the results of the CNO counting and spectral analyses.

On the left, the counting analysis bar chart: the height represents the number of events allowed by the data for CNO-neutrinos and backgrounds in the region of interest (ROI). The less events in the ROI, the minimum the CNO signal is while backgrounds are maximum; likewise, more events in the ROI, CNO  signal is maximum and backgrounds are minimum. It is clear from this figure that the contribution of CNO neutrinos cannot be zero.

In the following plots (as in Figure Extended Data 7 of our article), we present the angular and radial uniformity of the

events in the optimized energy window. 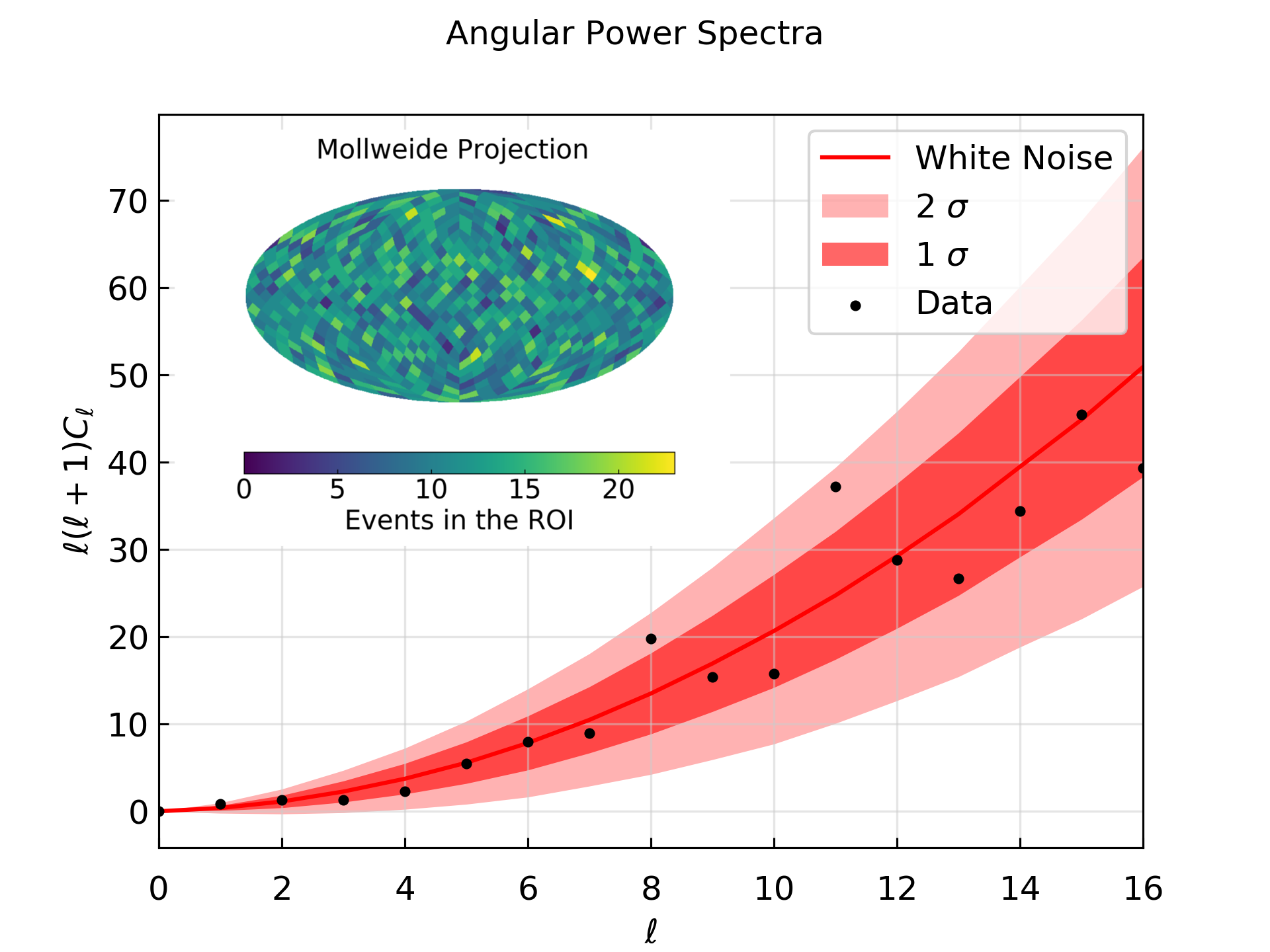 The angular power spectrum as a function of the multipole moment

(pink) confidence levels (C.L.). Data are compatible with a uniform distribution within the uncertainty of 0.59 cpd per 100 t.  The inset represents the angular distribution of the 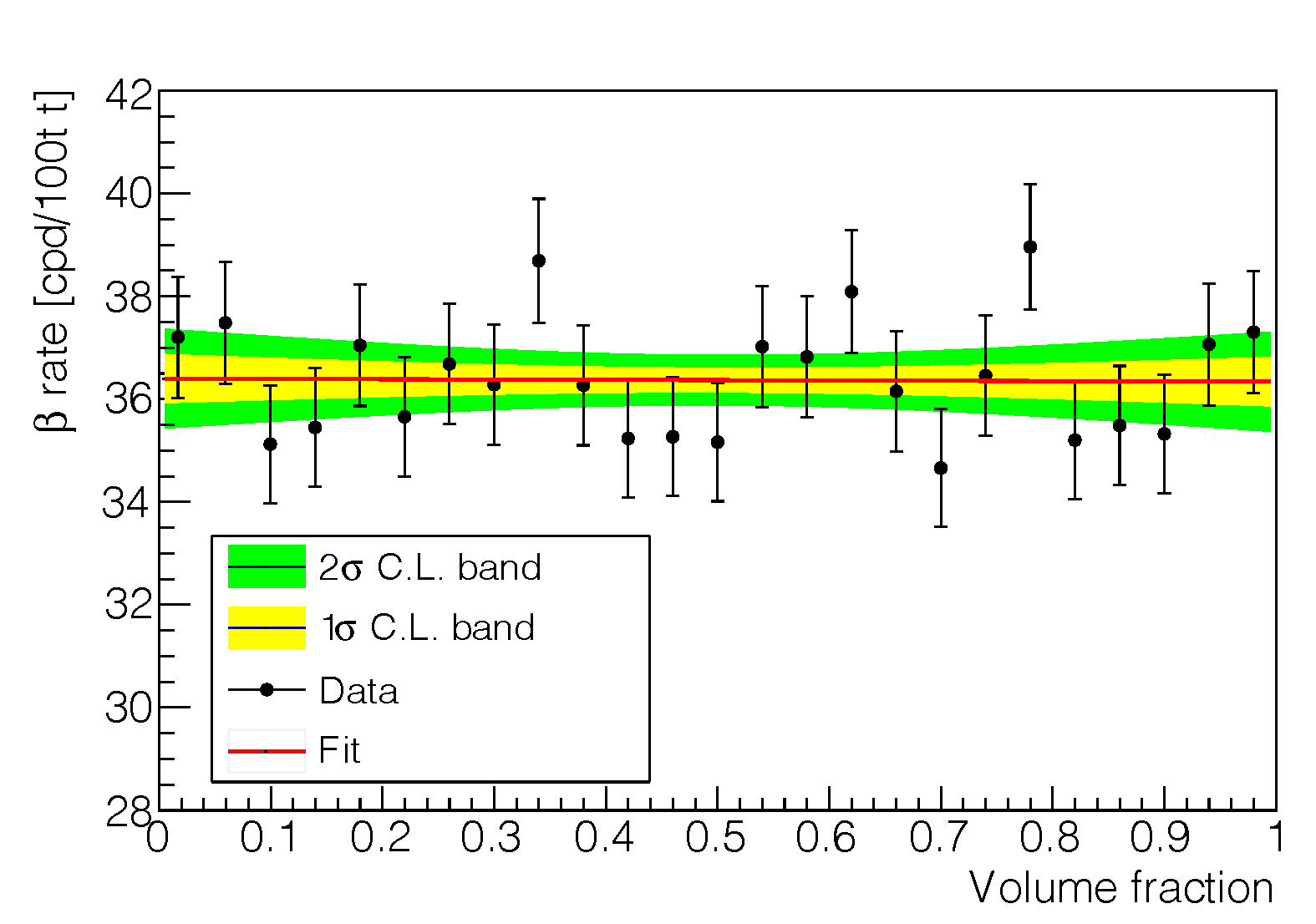 Here above we show the normalized radial distribution of

(black points, bins properties available here), where r = 2.5 m is the radius of the sphere surrounding the analysis fiducial volume.

(green) confidence level bands. The data are compatible with a uniform distribution within 0.52 cpd (counts per day) per 100 t.

Figure Extended data 8 as in our publication shows the energy distributions from a multivariate fit of the Borexino data. 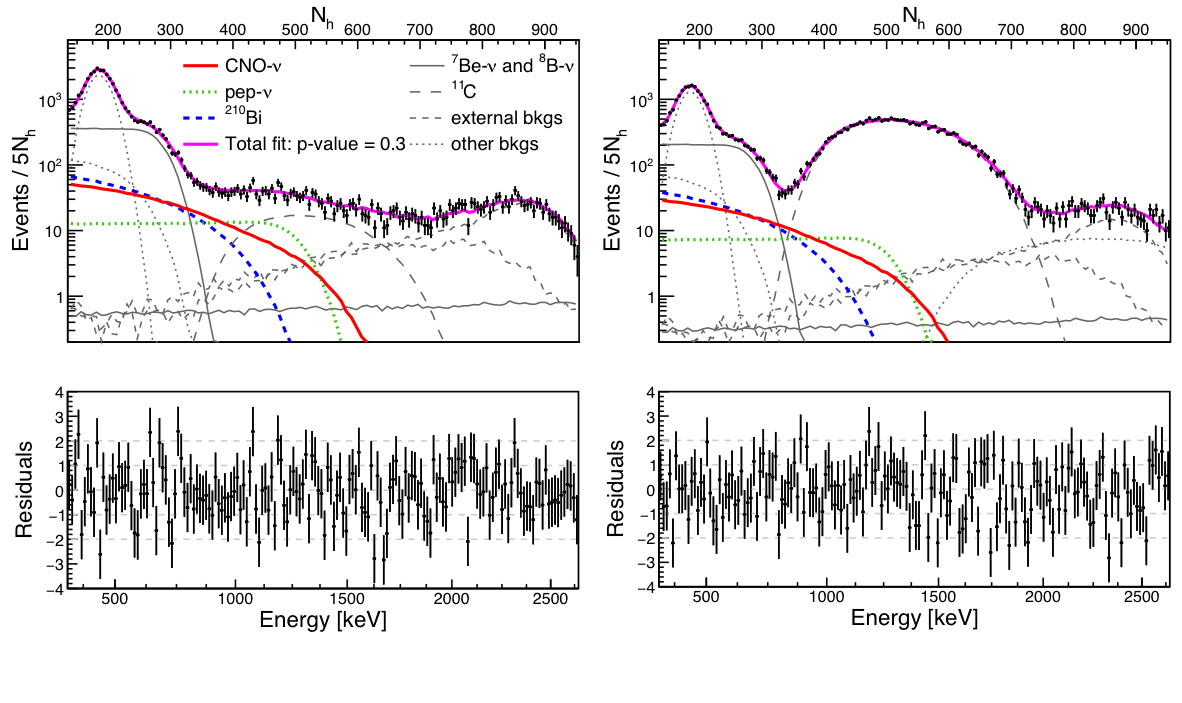 spectrum, and in grey we report the remaining background contributions. 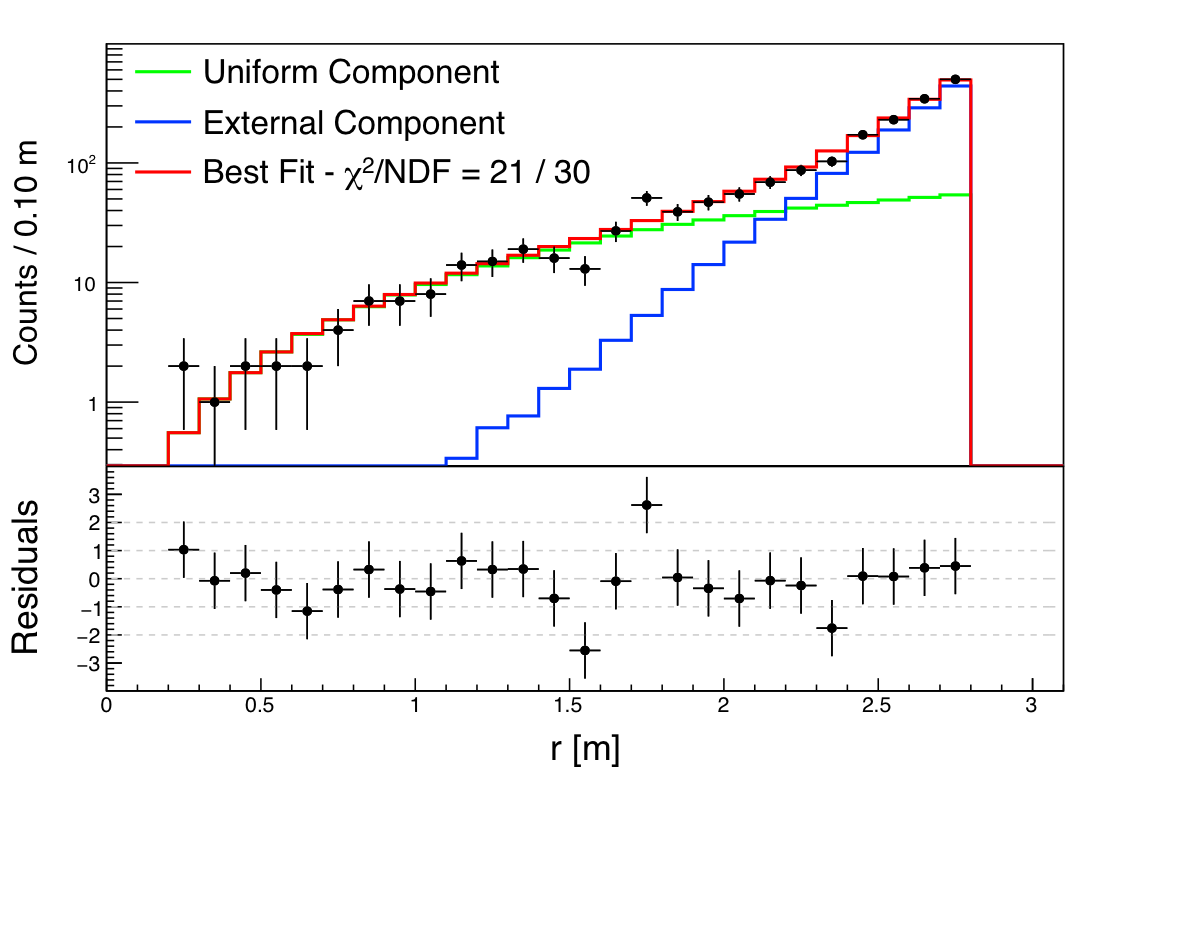 In this plot, the red line is the resulting fit, the green line represents the internal uniform contribution and the blue line shows the non-uniform contribution from the external background. Bins properties of data and residuals are available for download.

Finally, we report in Figure Extended data 10 of the  Nature paper a frequentist hypothesis test for our CNO observation. 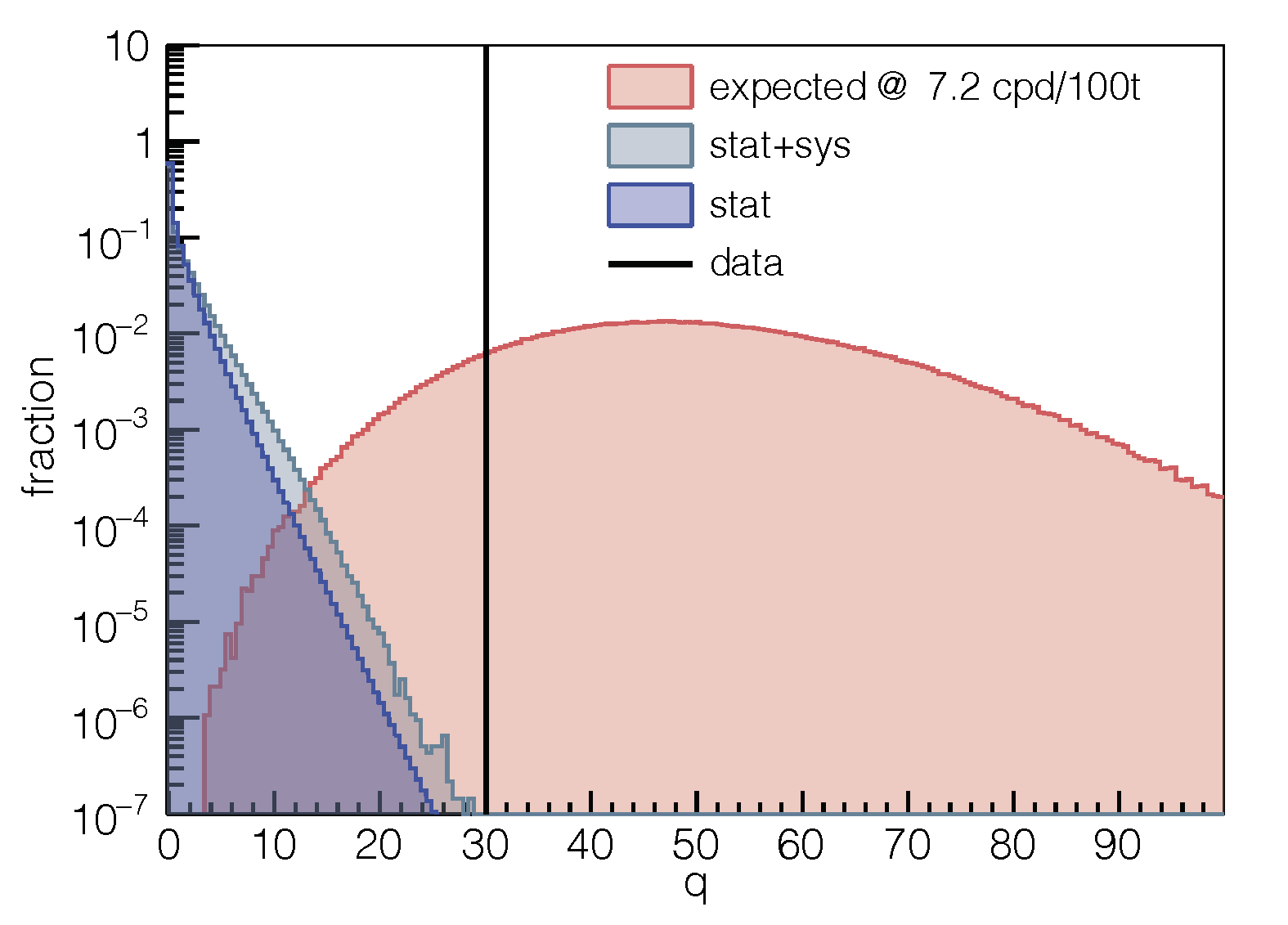 This plot shows the distribution of the test statistics q (defined in Eq. 5 of our paper), obtained from Monte Carlo pseudodatasets.

gives the significance of the CNO discovery (>5.0

without the systematics. The red histogram represents the expected test statistics distribution (bin properties available here) for an injected CNO rate equal to 7.2 cpd (counts per day) per 100 t that is, our best fit value.

Video: “Detection of a 2nd Type of Nuclear Fusion Inside the Sun”

First real time detection of 7Be solar neutrinos by Borexino